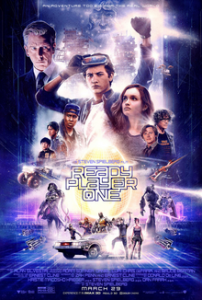 In the not-so-distant future - the world has turned into a very bleak place, but luckily there is OASIS, a virtual reality world that is a vast online utopia. Along with millions of other world-wide citizens, Wade dreams of finding three keys left behind by James Halliday, the richest man to have ever lived. The keys are rumored to be hidden inside the OASIS, and whoever finds them will inherit Halliday's fortune. Stuffed to the gills with action, puzzles, nerdy romance, and 80s nostalgia, this high energy cyber-quest will make geeks everywhere feel like they were separated at birth from author Ernest Cline.

Ready Player One is a 2018 American science fiction adventure film produced and directed by Steven Spielberg. The film stars Tye Sheridan, Olivia Cooke, Ben Mendelsohn, Lena Waithe, T.J. Miller, Simon Pegg, and Mark Rylance. It grossed $582 million worldwide, making it the sixth-highest-grossing film of 2018. The film received generally positive reviews, critics praised its visuals, brisk pacing, and Rylance's performance. The film was noted to have significant differences from the book; some critics said the film's plot was an improvement over the source material

If you want more virtual reality twists, they are abundant in these titles similar to Ernest Cline's popular science fiction thriller.