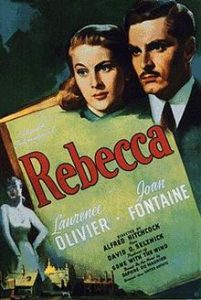 With these words, the reader is ushered into an isolated gray stone mansion on the windswept Cornish coast, as the second Mrs. Maxim de Winter recalls the chilling events that transpired as she began her new life as the young bride of a husband she barely knew. For in every corner of every room were phantoms of a time dead but not forgotten - a past devotedly preserved by the sinister housekeeper, Mrs. Danvers: a suite immaculate and untouched, clothing laid out and ready to be worn, but not by any of the great house's current occupants. With an eerie presentiment of evil tightening her heart, the second Mrs. de Winter walked in the shadow of her mysterious predecessor, determined to uncover the darkest secrets and shattering truths about Maxim's first wife - the late and hauntingly beautiful Rebecca.

Rebecca is a 1940 American romantic psychological thriller film directed by Alfred Hitchcock. The film stars Laurence Olivier as the brooding, aristocratic widower Maxim de Winter, and Joan Fontaine as the young woman who becomes his second wife, with Judith Anderson and George Sanders in supporting roles. The film is a gothic tale shot in black-and-white. Rebecca won two Academy Awards, Best Picture, and Cinematography, out of a total 11 nominations. Olivier, Fontaine, and Anderson also were Oscar-nominated for their respective roles as were Hitchcock and the screenwriters.

Something off in your Gothic-style mansion? If you're looking for a tale that embraces that haunting you-may-not-be-alone feeling, check out the suggestions on this list.