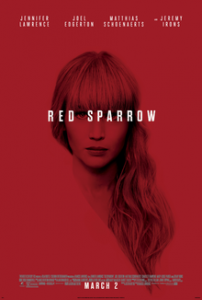 Drafted against her will to serve the regime of Vladimir Putin as an intelligence seductress, Dominika Egorova engages in a charged effort of deception and tradecraft with first-tour CIA officer Nathaniel Nash before a forbidden attraction threatens their careers.

Red Sparrow is a 2018 American spy thriller film directed by Francis Lawrence and written by Justin Haythe. The film stars Jennifer Lawrence, Joel Edgerton, Matthias Schoenaerts, Charlotte Rampling, Mary-Louise Parker, and Jeremy Irons. It tells the story of a Russian intelligence officer who is sent to make contact with a CIA agent in the hope of discovering the identity of a mole. Author Matthews, a former member of the CIA, advised the production on the depiction of spying. Red Sparrow premiered at Newseum in Washington, D.C. on February 15, 2018. The film grossed $151 million worldwide and received mixed reviews from critics.

If you like Russian espionage, maybe mixed with some dangerous, forbidden love, check out these fictional spy novels.