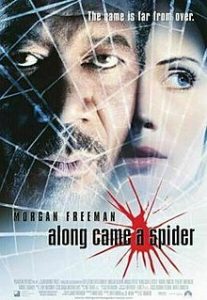 Washington, D.C., police detective Alex Cross becomes caught up in a kidnapping case that may involve Gary Soneji, a teacher at an elite private school who is also a schizophrenic psychopath and serial murderer.

Along Came A Spider

Along Came a Spider is a 2001 American neo-noir psychological thriller film directed by Lee Tamahori. The screenplay by Marc Moss was adapted from the 1993 novel of the same title by James Patterson, but many of the key plot elements of the book were controversially eliminated. The movie received negative to mixed critical reviews, although it became a box office success. It stars Morgan Freeman as Detective Alex Cross, Monica Potter, Michael Wincott, Penelope Ann Miller, and Michael Moriarty.

Along Came A Spider is the first in the Alex Cross mystery series, but these book suggestions have nothing to do with Cross and his career - instead, the plots are similar to Along Came A Spider and will keep you on the very edge of your seat.

View more suggestions for Along Came A Spider.