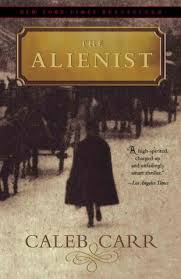 The year is 1896. The city is New York. Newspaper reporter John Schuyler Moore is summoned by his friend Dr. Laszlo Kreizler - a psychologist, or "alienist"—to view the horribly mutilated body of an adolescent boy abandoned on the unfinished Williamsburg Bridge. From there the two embark on a revolutionary effort in criminology: creating a psychological profile of the perpetrator based on the details of his crimes. Their dangerous quest takes them into the tortured past and twisted mind of a murderer who will kill again before their hunt is over.

The Alienist is an American period drama television ten-episode limited series that first aired on TNT on January 22, 2018, and ended on March 26, 2018. The series stars Daniel Brühl, Luke Evans, and Dakota Fanning as an ad hoc team assembled in mid-1890s New York City to investigate a serial killer who is murdering street children.

If you enjoyed The Alienist, check out these suggestions for the popular historical mystery.

View more suggestions for The Alienist.