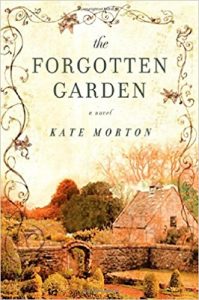 Abandoned as a tiny girl on a ship headed for Australia, Nell Andrews sets out on a journey to England to try to trace her story, to find her real identity. Her quest leads her to Blackhurst Manor on the Cornish coast and the secrets of the doomed Mountrachet family. But it is not until her granddaughter, Cassandra takes up the search after Nell's death that all the pieces of the puzzle are assembled.

If you enjoyed the air of mystery and intrigue Kate Morton's bestseller brought, check out these domestic fiction titles for adults.

Autumn 1928. Three young women are on their way to India, each with a new life in mind. Each of them has their own reason for leaving their homeland but the hopes and secrets they carry can do little to prepare them for what lies ahead in India.

An American nursery owner with a rare gift with plants jumps at the chance to help revive a run-down, Shakespearean garden on a country estate in England and becomes intrigued with the house's haunting history and the owner's brother-in-law.

In 1901, a ship sinks off the coast of Lighthouse Bay in Australia. The only survivor is Isabella Winterbourne who clutches a priceless gift meant for the Australian Parliament. Suddenly, this gift could be her ticket to a new life, free from the bonds of her husband and his overbearing family. One hundred years later, Libby Slater leaves her life in Paris to return to her hometown of Lighthouse Bay. Libby did something so unforgivable twenty years ago, Juliet is unsure if she can ever trust her sister again. In this adventurous love story spanning centuries, both Isabella and Libby must learn that letting go of the past is the only way to move into the future.

Assembling at their country house one final time before it is sold, four siblings and their children share past memories, hidden passions, and devastating secrets that threaten to overwhelm them.

A tale of a pair of young scholars researching the lives of two Victorian poets. As they uncover their letters, journals, and poems, and track their movements from London to Yorkshire - from spiritualist séances to the fairy-haunted far west of Brittany - what emerges is an extraordinary counterpoint of passions and ideas.