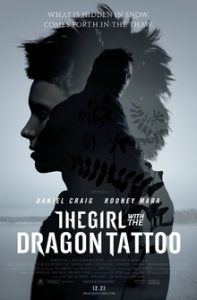 The disappearance forty years ago of Harriet Vanger, a young scion of one of the wealthiest families in Sweden, gnaws at her octogenarian uncle, Henrik Vanger. He is determined to know the truth about what he believes was her murder. He hires crusading journalist Mikael Blomkvist, recently at the wrong end of a libel case, to get to the bottom of Harriet's disappearance. Lisbeth Salander, a twenty-four-year-old, pierced, tattooed genius hacker, possessed of the hard-earned wisdom of someone twice her age - and a terrifying capacity for ruthlessness - assists Blomkvist with the investigation. This unlikely team discovers a vein of nearly unfathomable iniquity running through the Vanger family, an astonishing corruption at the highest echelon of Swedish industrialism - and a surprising connection between themselves.

The Girl With the Dragon Tattoo

Film versions of the first three Millennium books, all three films released in 2009, beginning with The Girl with the Dragon Tattoo, directed by Danish filmmaker Niels Arden Oplev. The protagonists were played by Michael Nyqvist and Noomi Rapace. A Hollywood film adaptation of the book, directed by David Fincher, was released in December 2011. The main characters were portrayed by Daniel Craig and Rooney Mara.

View more suggestions for The Girl with the Dragon Tattoo.