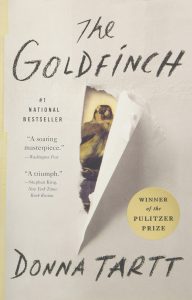 The Goldfinch by Donna Tart
Theo Decker loses his mother in a terrorist bombing, which he miraculously survives. Abandoned by his cruel father, he is taken in by the family of a wealthy friend. Clinging to the last memory of his mother a small painting of a goldfinch, he is eventually drawn into the mysterious underworld of art, leading him into a dangerous circle of lies and deceit. Winner of the 2014 Pulitzer Prize for Fiction.

The Goldfinch is an upcoming 2019 American drama film directed by John Crowley. It stars Ansel Elgort as Theo Decker, Nicole Kidman as Samantha Barbour, Aneurin Barnard as Boris Pavlikovsky, Sarah Paulson as Xandra, Luke Wilson as Larry Decker and Jeffrey Wright as James "Hobie" Hobart. It will be released on September 13, 2019.

The Goldfinch has multiple literary themes, and these books cover similar plot lines seen in the Pulitzer-prize winning book.

View more suggestions for The Goldfinch.