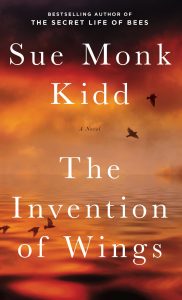 The story follows Hetty "Handful" Grimke, a Charleston slave, and Sarah, the daughter of the wealthy Grimke family. The novel begins on Sarah's eleventh birthday when she is given ownership over Handful, who is to be her handmaid. "The Invention of Wings" follows the next thirty-five years of their lives. Inspired in part by the historical figure of Sarah Grimke (a feminist, suffragist and, importantly, an abolitionist), Kidd allows herself to go beyond the record to flesh out the inner lives of all the characters, both real and imagined.

The Invention of Wings

If you want to read another fictional memoir about powerful women in the middle of dangerous controversies, check out these titles.

A young woman from Nigeria leaves behind her home and her first love to start a new life in America, only to find her dreams are not all she expected.

A sweeping historical tale based on the life and times of the daughter of a New York merchant finds the orphaned Belle suffering at the hands of a rival cousin before working as a prostitute and transforming herself repeatedly to win the love and life she desires.

Martha Carrier was one of the first women to be accused, tried and hanged as a witch in Salem, Massachusetts. Like her mother, young Sarah Carrier is bright and willful, openly challenging the small, brutal world in which they live. Often at odds with one another, mother and daughter are forced to stand together against the escalating hysteria of the trials and the superstitious tyranny that led to the torture and imprisonment of more than 200 people accused of witchcraft. This is the story of Martha's courageous defiance and ultimate death, as told by the daughter who survived.

In Kabul, 2007, with a drug-addicted father and no brothers, Rahima and her sisters can only sporadically attend school and rarely leave the house. Their only hope lies in the ancient custom of bacha posh, which allows young Rahima to dress and be treated as a boy until she is of marriageable age.

Abducted from Africa as a child and enslaved in South Carolina, Aminata Diallo thinks only of freedom - and of the knowledge she needs to get home. This captivating story of one woman's remarkable experience spans six decades and three continents and brings to life a crucial chapter in world history.

View more suggestions for The Invention of Wings.