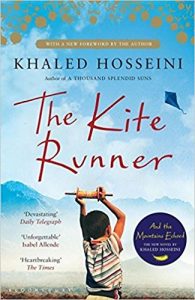 An epic tale of fathers and sons, of friendship and betrayal, that takes us from Afghanistan in the final days of the monarchy to the atrocities of the present. The unforgettable, heartbreaking story of the unlikely friendship between a wealthy boy and the son of his father's servant, The Kite Runner is a beautifully crafted novel set in a country that is in the process of being destroyed. It is about the power of reading, the price of betrayal, and the possibility of redemption, and it is also about the power of fathers over sons—their love, their sacrifices, their lies.

The Kite Runner is also a 2007 American drama film directed by Marc Forster from a screenplay by David Benioff.

For more titles like The Kite Runner, check out the titles below.

In his short life, eleven-year-old Fawad has known more grief than most: his father and brother have been killed, his sister has been abducted, and Fawad and his mother, Mariya, must rely on the charity of parsimonious relatives to eke out a hand-to-mouth existence. But life, especially in Kabul, is never without peril, and the next calamity Fawad must face is so devastating that it threatens to destroy the one thing he thought he could never lose: his love for his country.

Alireza Courdee, an Indian fourteen-year-old straight-A student, and chemistry whiz, takes his first hit of pot. For the first time, Reza—now Rez—feels like an American teen. Life is smooth; even lying to his strict father comes easily. Timely, nuanced, and emotionally forceful, A Good Country is a gorgeous meditation on modern life, religious radicalization, and a young man caught between vastly different worlds.

In a crumbling, isolated house at the foot of Mount Kanchenjunga in the Himalayas lives an embittered judge who wants only to retire in peace, when his orphaned granddaughter, Sai, arrives on his doorstep.

On the heels of their arranged wedding, Ashoke and Ashima Ganguli settle together in Cambridge, Massachusetts. An engineer by training, Ashoke adapts far less warily than his wife, who resists all things American and pines for her family. When their son is born, the task of naming him betrays the vexed results of bringing old ways to the new world.

A portrayal of two women discovering an emotional rapport as they struggle against the confines of a rigid caste system.

Mohsen comes from a family of wealthy shopkeepers whom the Taliban has destroyed; Zunaira, his wife, exceedingly beautiful, who was once a brilliant teacher and is now no longer allowed to leave her home without an escort or covering her face. Intersecting their world is Atiq, a prison keeper, a man who has sincerely adopted the Taliban ideology and struggles to keep his faith, and his wife, Musarrat, who once rescued Atiq and is now dying.