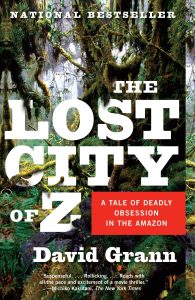 In 1925, the legendary British explorer Percy Fawcett ventured into the Amazon jungle in search of a fabled civilization located deep in the deadly wilderness. He never returned. In this masterpiece of narrative nonfiction, journalist David Grann tells the epic story of Fawcett's quest for this 'Lost City of Z," and unravels the greatest exploration mystery of the twentieth century.

The Lost City of Z

The Lost City of Z is a 2016 American biographical adventure drama film written and directed by James Gray. The film stars Charlie Hunnam as Fawcett; Robert Pattinson as his fellow explorer, Henry Costin; and Sienna Miller as his wife, Nina Fawcett.

If you want another daring exploration book like David Grann's bestseller, check out these nonfiction suggestions.

View more suggestions for The Lost City of Z.