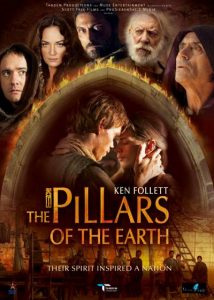 The Pillars of the Earth tells the story of Philip, prior of Kingsbridge, a devout and resourceful monk driven to build the greatest Gothic cathedral the world has known . . . of Tom, the mason who becomes his architect - a man divided in his soul . . . of the beautiful, elusive Lady Aliena, haunted by a secret shame . . . and of a struggle between good and evil that will turn church against state and brother against brother.

The Pillars of the Earth

The Pillars of the Earth was an eight-part 2010 TV miniseries. It debuted in the U.S. on Starz and in Canada on The Movie Network/Movie Central on July 23, 2010. In 2011, the series was nominated for 3 Golden Globes, including Best Mini-Series or Motion Picture Made for Television, Ian McShane for Best Actor and Hayley Atwell for Best Actress at the 68th Annual Golden Globe Awards.

If you like Pillars of the Earth by Ken Follett, try these other historical-fiction tales of the medieval world.

View more suggestions for The Pillars of the Earth.