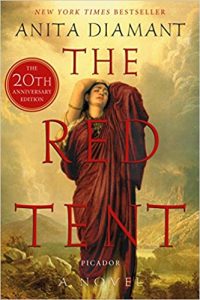 Based on the Book of Genesis, Dinah, Jacob's only daughter, shares her perspectives on the origins of many of our modern religious practices and sexual politics, imparting the lessons she has learned from her father's wives.

The Red Tent miniseries premiered on Lifetime in 2014. It stars Rebecca Ferguson and Minnie Driver.

These fictionalized Christian narratives weave tales of powerful Biblical women who rely heavily on their faith and guidance from God.

Based on the biblical account of Esther, this story imagines the life and passion of this beautiful woman whose courage and influence impacted history and the fate of her people.

As the harsh Jerusalem winter of 1948 wears on, Holocaust survivor Rachel Sachar prays for some word from her husband. Then one night a stranger named Eben Golah arrives with a message from Moshe and the translation of the ancient diary of Mary Magdalene.

A young woman taken into the prophet Isaiah's household rises to capture the heart of the future king.

Sprung from the pages of The New Testament, Living Water is a gripping and lyrical portrayal of a young woman's search for identity set against the strict social confines of the time.

Rebekah leaves her father's house to marry Isaac, the studious young son of the storied Sarah and Abraham, only to find herself caught up in a series of painful rivalries, first between her husband and his brother, Ishmael, and later between her sons, Jacob and Esau.