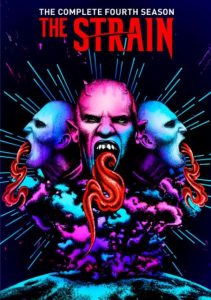 Abraham Setrakian, a former professor, and survivor of the Holocaust joins forces with CDC specialist Eph Goodweather to battle a vampiric virus that has infected NewYork in this first installment in a thrilling trilogy about a horrifying battle between man and vampire that threatens all humanity.

The Strain is an American horror drama television series that aired on FX from 2014 to 2017. The show received generally positive reviews from critics.

If you like bloodsucking thrillers filled with chilling tales of apocalyptic horror, these titles are just for you.

Draco Incendia Trychophyton: a highly contagious spore that marks its hosts with beautiful black and gold marks across their bodies before causing them to burst into flames. There is no antidote. Harper Grayson was a nurse who treated hundreds of infected patients; now the telltale gold-flecked marks are on her skin. But Harper wants to live at least until the fetus she is carrying comes to term. Her husband Jakob becomes unhinged and abandons her. And a man in a dirty yellow fire fighter's jacket straddles the abyss between insanity and death. Known as The Fireman, he has learned to control the fire within himself, using it as a shield to protect the hunted - and as a weapon to avenge the wronged.

View more suggestions for The Strain.