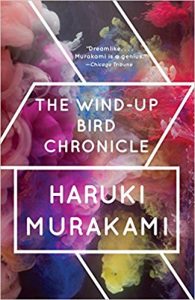 Having quit his job, Toru Okada is enjoying a pleasant stint as a "house husband", listening to music and arranging the dry cleaning and doing the cooking - until his cat goes missing, his wife becomes distant and begins acting strangely, and he starts meeting enigmatic people with fantastic life stories. They involve him in a world of psychics, shared dreams, out-of-body experiences, and shaman-like powers, and tell him stories from Japan's war in Manchuria, about espionage on the border with Mongolia, the battle of Nomonhan, the killing of the animals in Hsin-ching's zoo, and the fate of Japanese prisoners-of-war in the Soviet camps in Siberia.

If you enjoy the magical realism of Murakami, check out these other authors who are just as brilliant in the unique genre.

Cloud Atlas begins in 1850 with Adam Ewing, an American notary voyaging from the Chatham Isles to his home in California. Along the way, Ewing is befriended by a physician, Dr. Goose, who begins to treat him for a rare species of brain parasite . . . then, the narrative begins to time jump. As the narrative then boomerangs back through centuries and space, returning by the same route, in reverse, to its starting point. As wild as a videogame, as mysterious as a Zen koan, Cloud Atlas is an unforgettable tour de force that, like its incomparable author, has transcended its cult classic status to become a worldwide phenomenon.

In a country teetering on the brink of civil war, two young people meet - sensual, fiercely independent Nadia and gentle, restrained Saeed. They embark on a furtive love affair, thrust into premature intimacy by the unrest roiling their city. When it explodes, turning familiar streets into a patchwork of checkpoints and bomb blasts, they begin to hear whispers about doors - doors that can whisk people far away, if perilously and for a price.

A gallery attendant at the Hermitage. A young jazz buff in Tokyo. A crooked British lawyer in Hong Kong. A disc jockey in Manhattan. A physicist in Ireland. An elderly woman running a tea shack in rural China. A cult-controlled terrorist in Okinawa. A musician in London. A transmigrating spirit in Mongolia. What is the common thread of coincidence or destiny that connects the lives of these nine souls in nine far-flung countries, stretching across the globe from east to west?

Gumshoe Conrad Metcalf has problems - not the least of which are the rabbit in his waiting room and the trigger-happy kangaroo on his tail. Near-future Oakland is an ominous place where evolved animals function as members of society, the police monitor citizens by their karma levels, and mind-numbing drugs such as Forgettol and Acceptol are all the rage. In this brave new world, Metcalf has been shadowing the wife of an affluent doctor, perhaps falling a little in love with her at the same time. But when the doctor turns up dead, our amiable investigator finds himself caught in the crossfire in a futuristic world that is both funny - and not so funny.

Presents a satirical drama about Satan's visit to Moscow, where he learns that the citizens no longer believe in God. He decides to teach them a lesson by perpetrating a series of horrific tricks. Combines two distinct yet interwoven parts, one set in contemporary Moscow, the other in ancient Jerusalem.