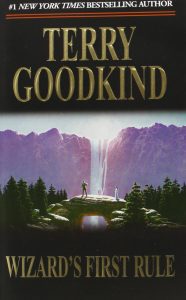 The hero is Richard-the-Seeker, a woodsman with a magic sword. One day in his forest he rescues a woman pursued by assassins. She turns out to be Kahlan Amnell from the neighboring kingdom of Midlands who is seeking a wizard named Zedd to help her destroy the tyrant ruling her kingdom. Richard takes her to him and the novel is the story of their joint adventure. A first novel.

If you want another fantasy novel involving the magic of wizards, check out these titles.