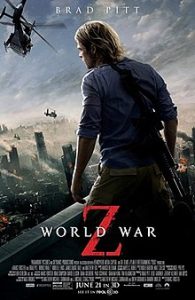 We survived the zombie apocalypse, but how many of us are still haunted by that terrible time? We have (temporarily?) defeated the living dead, but at what cost? Told in the haunting and riveting voices of the men and women who witnessed the horror firsthand, World War Z, a #1 New York Times bestseller and the basis for the blockbuster movie, is the only record of the plague years.

World War Z is a 2013 American action horror film directed by Marc Forster. The film stars Brad Pitt as Gerry Lane, a former United Nations investigator who must travel the world to find a way to stop a zombie pandemic. World War Z premiered in London on June 3, 2013, and was released everywhere on June 21, 2013, in the United States, in 2D and RealD 3D. The film received positive reviews for Brad Pitt's performance and as a realistic revival of the zombie genre. It has become the becoming the highest-grossing zombie film of all time. A sequel was announced shortly after the film's release and is currently in production.

Zombies are popular in this day and age, especially in movies and television. But they're also popular in literature and graphic novels. World War Z helped start the hype - now check out these suggested adult fiction titles for all of your undead needs.