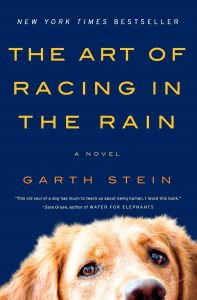 Nearing the end of his life, Enzo, a dog with a philosopher's soul, tries to bring together the family, pulled apart by a three-year custody battle between daughter Zoe's maternal grandparents and her father Denny, a race car driver.

The Art of Racing in the Rain

If you want another heartwarming dog tale, check these suggestions out.

When her cuddly canine companion Boomer is diagnosed with a rare heart condition, Jennifer Westbrook, decides to take a leave of absence from her busy PR job - and take Boomer on the greatest road trip of his life.

Searching for his purpose over the course of multiple canine lives, Bailey is reborn as a golden-haired puppy after a tragic death as a stray and shares a loving bond with young Ethan before he again dies and starts over.

A heartwarming tale of hope and friendship set during World War II, in which a British farm girl, an American pilot, and a German soldier are brought together by an unlikely hero: a (very cute) border collie.

A highly original, tragicomic novel as seen through Sirius, an extraordinary dog who helps his Jewish family escape from Germany to California, becomes a Hollywood star, and, ultimately, contributes to Hitler's downfall.

Lila Elliot knows she's lucky. A shooting rampage at her office left several colleagues dead and others seriously wounded. Yet though she gratefully retreats to her best friend's house to recuperate, Lila can't quite move past her fear and anger. Being drafted into caring for Grace - a shaggy formerly abused golden retriever - only adds to her stress. But Grace, like Lila, needs time and space to recover. And in helping Grace to trust, Lila is being gently nudged toward the courage she needs to do the same.

View more suggestions for The Art of Racing in the Rain.