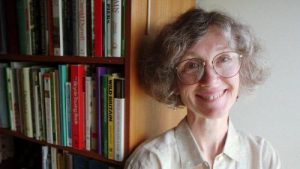 When Mary Downing Hahn writes a book, she works along steadily until that magic moment when the characters develop their own voices. Whether it's a mean-mouthed boy who is hiding family secrets or a girl who is terrified of the ghostly presence haunting her small step-sister, this author's characters tell their own stories both believably and intriguingly.

Mary Downing grew up in a small town called College Park, Maryland, not too far from Washington, D.C. In the 1940s and 1950s, College Park was a terrific place to be a kid. There were plenty of places to run around - woods, pastures, and neighborhoods full of kids her own age. She would later capture her memories of the town in a trilogy that begins with Stepping on Cracks.

Yet her own early childhood was not easy. To make ends meet, both her father and mother had to work when she was quite small. She was left in the care of her grandmother, who lived with her parents. Most times this arrangement works out well for a family, but in Mary's case her grandmother was not mentally well and was cruel to the little girl and rude to her parents.

Soon Mary took to spending as much time as possible outdoors, away from the woman who frightened her so much. Yet when her grandmother died, she remembers feeling extremely guilty. Later, these remembered feelings would be channeled into her work, to make the characters more believable and human. The girls and boys in her stories may not be living perfect lives, but they are brave, and they do try to do the right thing.

When Mary later wrote about World War II and conflicted feelings about wars (Stepping on Cracks and December Stillness), she was drawing in part from her own childhood experiences. She remembered the strong support for the troops during the conflict, but she also remembered her devastation when her favorite uncle was killed while fighting overseas.

One early influence on her writing was the terrific radio shows of the time. These programs, such as Let's Pretend, were a great way for young people to pick up the art of storytelling just by listening. Mary also loved to read. Early favorites were The Little Engine That Could, Raggedy Ann and Andy books and the Winnie the Pooh stories. After her mother found her adding her own illustrations to the Pooh books, she made sure Mary had plenty of paper to use for practice!

Mary has kept her love of drawing all her life. When it was time to go to college, she chose the university in her hometown. There she studied studio art and English and became engaged to law student named William Hahn. Before settling down, she took a summer to visit Europe with her girlfriends in an old-fashioned VW bug with a copy of Europe on Five Dollars a Day as a guide. They had a wonderful time.

After she was married, she taught art for a year at a junior high school, but she didn't like being an authority figure to the children. She and her husband soon had two daughters. For a while, she stayed at home with them. She loved aloud to read to them and began to make up stories to keep them entertained. When she and her husband divorced, the girls were still small. There's some of the pain from the divorce and another visit from a frightening grandmother figure reflected in her book, The Time of the Witch.

After the breakup, she went back to school to get her Ph.D. in English, but ultimately she starting writing children's books. She also worked for PBS as an illustrator for a children's reading series, Cover to Cover. While there, Mary became more interested in children's literature and took a job as a children's library assistant. Instead of working on her dissertation, she finished her first novel, The Sara Summer.

This first book had a lot of the elements you would find in her later works: pre-teens in serious trouble who are lucky to have found good friends. Mary remarried in 1982 to Norman Pearce Jacob, a librarian. By 1991, her income from writing was steady enough so that she could leave her job at the library and devote herself to writing full-time. Many of her books, including Daphne's Book, Wait till Helen Comes, December Stillness, The Dead Man in Indian Creek, The Doll in the Garden, Stepping on Cracks, and The Wind Blows Backwards, are award-winners.

Mary Downing Hahn has written many excellent stories of suspense. Check out the top picks below.

More About Mary on the Web

Articles from Gale in Context: Biography are available to those who have a CRRL card. These writings discuss Mary Downing Hahn's life and works and are drawn from the following reference works: