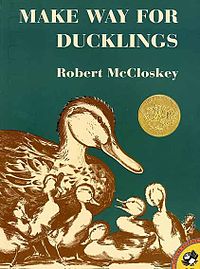 If you take a walk in Boston’s Public Garden, you may be greeted by a larger-than-life duck family out for a stroll: Mrs. Mallard, Jack, Kack, Lack, Mack, Nack, Ouack, Pack, and Quack. These bronze sculptures capture the frolicking illustrations of one of America’s most beloved children’s books—Make Way for Ducklings.
Prize-winning author/illustrator Robert McCloskey grew up before there were such things as television, computers, and the Internet, but he packed a lot of fun and creativity into those years. He tried to invent all sorts of helpful things, sometimes with disastrous results such as when he worked up a cotton candy machine using molasses and a vacuum cleaner. He was also musical, but it was his artistic talent that landed him a scholarship at Vesper George Art School in Boston. If it 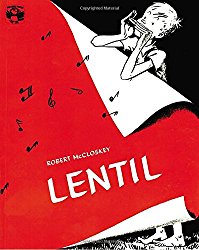 weren’t for that scholarship, he said, he probably would never have moved away from his small town.

Robert went on to study at the National Academy of Design in New York City. When he first approached a book publisher for illustration work, his portfolio was filled with the kind of moody, artsy images that were popular at his school. An editor advised him to “shelve the dragons, Pegasus, and limpid pool business” and draw things that were more true to life. He and she spent some time talking about his hometown in Ohio.

Indeed, his first picture book about a harmonica-playing boy named Lentil took a page from his own early years. By the time he settled down for his next book - the story of duck parents trying to find the safest place to raise their brood - Robert and his wife were living in a New York apartment, but he needed ducks to serve as his models. An ornithologist friend told him could get living, quacking ducklings at a market in Greenwich Village. Soon he had ducklings swimming, splashing, and waddling around their apartment, and he was well on his way to creating wonderful sketches.

After Make Way for Ducklings became a hit, Robert McCloskey’s starving artist days were behind him. He went on to win awards for books that he wrote as well as illustrated. Several of his best-known (Blueberries for Sal, One Morning in Maine, Time of Wonder, Burt Dow, Deep-Water Man) are set in Maine, the state where he and his family loved to spend their time. In each story, Robert added some imagination to real events to create books kids still love. 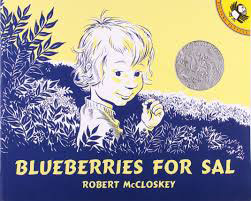 Learn More about Robert McCloskey in the library and online:

A Caldecott Celebration: Six Artists and Their Paths to the Caldecott Medal by Leonard S. Marcus

The Horn Book Radio Review, Robert McCloskey interviewed by Anita Silvey
This short interview was recorded in 1986. You may listen to it online or read the transcript.

Robert McCloskey, 88, of 'Make Way for Ducklings,' Is Dead
His obituary from the New York Times gives some high points in his career and has quotes from the writer/illustrator.

Travel back in time to visit with Robert McCloskey at his house in Maine as he works on Burt Dow, Deep-Water Man:
https://youtu.be/9g7bxcsA-EE