Mitsumasa Anno grew up in a traditional, beautiful Japanese village named Tsuwano, far away from any bustling city. Although he and his family lived near the sea, the mountains all around kept Anno from experiencing its vastness until he was older. When he was a child, he drew pictures of things he could see and also imagine: mountains, houses, and ghosts. His parents ran an inn, and the colorful magazines lying about for the guests' enjoyment were a big source of inspiration to him as he developed his love of drawing.

After graduating from a regional high school outside his hometown, he was drafted into the Japanese Army and served during World War II. Later he went to a teachers' college and taught math at elementary schools in Tokyo for several years. He married Midori Suetsugu, a cousin of Japanese Empress Michiko, in 1952. When he began writing and illustrating, he took what he learned during his teaching years of the way young children see things and used that to create some very unusual stories. He enjoys playing with ways of seeing in many of his books. For example in Upside Downers, the same pictures look like different things depending on how the book is held.

Some of his most popular books combine his practical experience teaching mathematics with eye-grabbing, detailed artwork. Anno's Mysterious Multiplying Jar and his Math Games books work really with students because they teach important mathematical concepts in fun way.

"I am like the traveler who rides through my Journey books—I travel whenever I can and draw wherever I go." — From Artist to Artist

Growing up as he did surrounded by mountains, Anno always wanted to know what interesting places lay beyond them. He loves to travel, and he has created books that allow readers of all ages share in his adventures. Anno's Journey is told in a traditional Japanese form called the picture scroll. In the story, a man rides on horseback through a land filled with small, important stories told only with pictures. His other journey books include Anno's Britain, Anno's Spain, Anno's USA, and Anno's Italy. 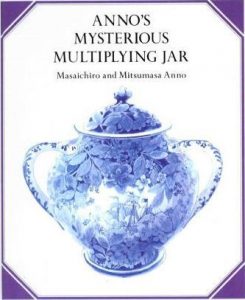 Birthday: March 20, 1926, in Tsuwano, Japan
First book: Topsy-Turvies: Pictures to Stretch the Imagination (1970)
How he does it: First he makes a pencil drawing. Then he adds the colors.
He has his own museum! In 2001, the Anno Museum of Art was established in his hometown of Tsuwano, Japan, to honor his work.
Some of his many honors:
The International Hans Christian Andersen Medal, in recognition of his "unique [gift for] communicating to both East and West"
Best Illustrated Books of the Year citation from the New York Times
Outstanding Science Books for Children citation from the New York Academy of Sciences
Jane Addams Children's Book Honorary Award

Check out these books that tell more about Anno:

Artist to Artist: 23 Major Illustrators Talk to Children about Their Art
This book will make you smile! Anno shares his thoughts as to what makes original art and the artists who create it so special.

Ways of Telling: Conversations on the Art of the Picture Book by Leonard S. Marcus
In an interview that was done in 1989, Anno talked about how children think and his own different ways of seeing. 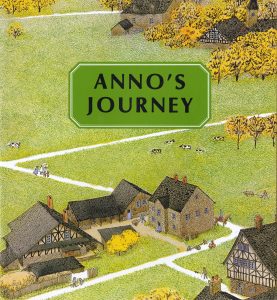 And check out these books by Anno that are owned by our library.

"In the Days Before Electricity: Interview with Artist Mitsumasa Anno"
In this 2013 interview, Mitsumasa Anno talks about what inspired him to write his recent Journey book, set in the days before electricity.

An Interview with Mitsumasa Anno
Anno answers in-depth questions on several of his books, including All in a Day and Anno's Alphabet. From Japanese Children's Books magazine, Winter 2004.

"Mitsumasa Anno" in Contemporary Authors Online, Thomson Gale, 2007. (Access through Biography in Context)
This lengthy article from a trusted library reference source has biographical and professional information for Anno. You will need a CRRL library card to read the article remotely. If you are not a CRRL patron, you may find that your local library also subscribes to this database.