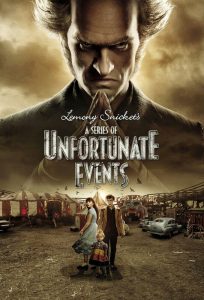 After the sudden death of their parents, the three Baudelaire children must depend on each other and their wits when it turns out that the distant relative who is appointed their guardian is determined to use any means necessary to get their fortune. There are 13 books in the series, with The Bad Beginning being the first.

The TV Show: A Series of Unfortunate Events is an American black comedy-drama television series from Netflix. It stars Neil Patrick Harris, Patrick Warburton, Malina Weissman, Louis Hynes, K. Todd Freeman, and Presley Smith. The first season, premiered on January 13, 2017, and consisted of eight episodes which adapted the first four books of the series. The series was renewed for a second season in March 2017, intended to consist of ten episodes that adapt books five through nine of the novel series, and was renewed for a third season a month later, which is expected to adopt the remaining four books. The second season was released March 30, 2018. In 2019, books 10-13 will be adapted for a final season.

If you enjoy Lemony Snicket's dark comedies, check out these other similar titles involving villainous antics and brave orphans.

See more suggested titles for A Series of Unfortunate Events.