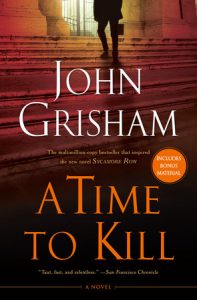 When Carl Lee Hailey guns down the monsters who have raped his ten-year-old child, the people of Clanton see it as a crime of blood and call for his acquittal.

A Time to Kill

A Time to Kill is a 1996 American crime drama film based on John Grisham's 1989 novel and directed by Joel Schumacher. Sandra Bullock, Samuel L. Jackson, Matthew McConaughey, and Kevin Spacey star, with Oliver Platt, Ashley Judd, Kiefer and Donald Sutherland, and Patrick McGoohan appearing in supporting roles. The film was a critical and commercial success, making $152 million at the worldwide box office.

If you want another Southernesque legal thrill ride, check out these suggestions.

View more suggestions for A Time to Kill.