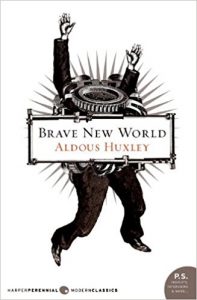 Huxley's terrifying vision of a controlled and emotionless future "Utopian" society is truly startling in its prediction of modern scientific and cultural phenomena, including test-tube babies and rampant drug abuse.

If you like Brave New World by Aldous Huxley, here are some other titles you may enjoy.

Anthony Burgess's hero, the hedonistic and violent Alex, is our guide on a journey into a dystopian future where sociopathic youths rule the night and the authorities emulate their moral indifference in the pursuit of social order.

Lilith Iyapo has just lost her husband and son when atomic fire consumes Earth. Hundreds of years later Lilith awakes, deep in the hold of a massive alien spacecraft piloted by the Oankali; who arrived just in time to save humanity from extinction. They have kept Lilith and other survivors asleep for centuries, as they learned whatever they could about Earth. For the first time since the nuclear holocaust, Earth will be inhabited. Grass will grow, animals will run, and people will learn to survive the planet's untamed wilderness. But their children will not be human. Not exactly.

In a society in which books are outlawed, Montag, a regimented fireman in charge of burning the forbidden volumes, meets a revolutionary school teacher who dares to read. Suddenly he finds himself a hunted fugitive, forced to choose not only between two women but between personal safety and intellectual freedom.

In 1962 in America, slavery is legal again. Twenty years earlier the United States lost a war and is now being occupied by Nazi Germany and Japan.

Genetically engineered tapeworms that protect most of the human populace from illness, boost everyone's immune system and even secrete designer drugs begin to change and want out of human bodies they occupy.