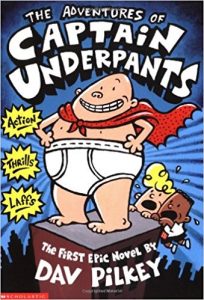 When George and Harold hypnotize their principal into thinking that he is the superhero Captain Underpants, he leads them to the lair of the nefarious Dr. Diaper, where they must defeat his evil robot henchmen.

Captain Underpants: The First Epic Movie is a 2017 animated superhero comedy film based on the children's novel series of the same name by Dav Pilkey. It stars the voices of Kevin Hart, Ed Helms, Nick Kroll, Thomas Middleditch, Jordan Peele, and Kristen Schaal.

The Adventures of Captain Underpants

If you like silly, unusual superheroes, these books are just for you.