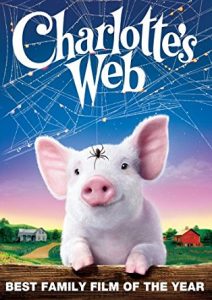 Wilbur the pig is desolate when he discovers that he is destined to be the farmer's Christmas dinner until his spider friend, Charlotte, decides to help him.

Charlotte's Web is a 2006 American live-action feature film based on the 1952 children’s novel of the same name by E. B. White. The screenplay is by Susannah Grant and Karey Kirkpatrick, based on White's book.

These classic children's books are heartwarming tales of friendship with animals, real or imagined, who have touched our literary hearts.

A horse in nineteenth-century England recounts his experience with both good and bad masters.

On an island off the coasts of Virginia and Maryland lives a centuries-old band of wild ponies. Among them is the most mysterious of all, Phantom, a rarely seen mare that eludes all efforts to capture her - that is, until a young boy and girl lay eyes on her and determine that they can't live without her.

The unexpected delivery of a large crate containing an Antarctic penguin changes the life and fortunes of Mr. Popper, a house painter obsessed by dreams of the Polar regions.

Young Travis faces a test of manhood when his heroic dog is bitten by a mad wolf.

When he finds a lost beagle in the hills behind his West Virginia home, Marty tries to hide it from his family and the dog's real owner, a mean-spirited man known to shoot deer out of season and to mistreat his dogs.

The escapades of four animal friends who live along a river in the English countryside - Toad, Mole, Rat, and Badger. Includes illustrator's note.

The adventures of Christopher Robin and his friends, in which Pooh Bear uses a balloon to get honey, Piglet meets a Heffalump, and Eeyore has a birthday.

A young boy living in the Ozarks achieves his heart's desire when he becomes the owner of two redbone hounds and teaches them to be champion hunters.