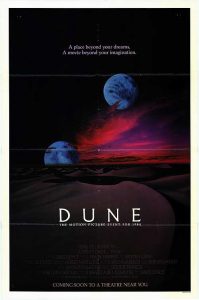 Follows the adventures of Paul Atreides, the son of a betrayed duke given up for dead on a treacherous desert planet and adopted by its fierce, nomadic people, who help him unravel his most unexpected destiny.

In 1984, Universal Pictures released Dune, a feature film adaptation of the novel by director and writer David Lynch (Twin Peaks). Although a commercial and critical failure upon release, Frank Herbert himself was reportedly pleased with the movie, as it stayed more faithful to the book than earlier movie adaptation attempts. It has since become a cult classic. In November 2016, Legendary Entertainment acquired the film and TV rights for Dune. It has been reported in  2016 that Denis Villeneuve was in negotiations to direct the project, which was confirmed in February 2017. In early 2018, Villenueve stated that the novel would be adapted into a two-part film series.

If you enjoyed Dune, you may enjoy these titles because of the detailed world-building, complex politics, and fascinating characters.