When Kendra and Seth go to stay at their grandparents' estate, they discover that it is a sanctuary for magical creatures and that a battle between good and evil is looming. 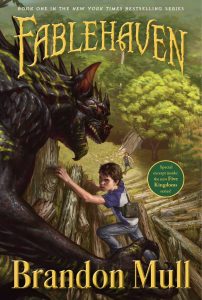 If you like the Fablehaven series, check out the following children's book titles with plenty of magic and mayhem.

While working at pleasant but mundane summer jobs in San Francisco, fifteen-year-old twins, Sophie and Josh, suddenly find themselves caught up in the deadly, centuries-old struggle between rival alchemists, Nicholas Flamel and John Dee, over the possession of an ancient and powerful book holding the secret formulas for alchemy and everlasting life.

When the Grace children go to stay at their Great Aunt Lucinda's worn Victorian house, they discover a field guide to fairies and other creatures and begin to have some unusual experiences.

After the grisly murder of his entire family, a toddler wanders into a graveyard where the ghosts and other supernatural residents agree to raise him as one of their own.

Twelve-year-old Meggie learns that her father, who repairs and binds books for a living, can "read" fictional characters to life when one of those characters abducts them and tries to force him into service.

When fate brings fourteen-year-old Leven and thirteen-year-old Winter together, they discover that for mankind to continue dreaming, the gateway between reality and dreams needs to be found and demolished.

After learning that she is the Princess, Jenna is whisked from her home and carried toward safety by the Extraordinary Wizard, those she always believed were her father and brother, and a young guard known only as Boy 412 - pursued by agents of those who killed her mother ten years earlier.