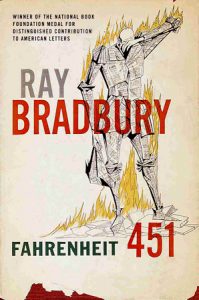 A book burner in a future fascist state finds out books are a vital part of a culture he never knew. He clandestinely pursues reading, until he is betrayed.

Fahrenheit 451 is a 2018 dystopian television film written and directed by Ramin Bahrani, that premiered on HBO, Saturday, May 19. It stars Michael B. Jordan as Guy Montag, Michael Shannon as Captain Beatty, and Sofia Boutella as Clarisse. The film received negative to mixed reviews, for "not burning bright as its classic source material" (Rotten Tomatoes). It was also made in a 1966 film, starring Julie Christie and Oskar Wener.

These suggested titles stem from Totalitarianism and state-sponsored terrorism that strike fear in our hearts - and fear for the future.