NOS4A2 by Joe Hill: Young Victoria "Vic" McQueen has a gift for finding misplaced or lost things. On her Raleigh Tuff Burner bike, she crosses a covered bridge in the middle of the woods and within moments is taken wherever she needs to go. 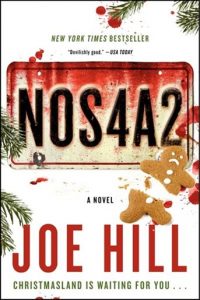 In a similar fashion, Charles "Charlie" Talent Manx takes children for rides in his 1938 Rolls-Royce Wraith with it's "NOS4A2" vanity plate, the thick smells of burning chestnuts and falling snow. His vehicle takes the children on a terrifying trip to his "playground" of amusements called "Christmasland." The children he takes never return to the real world again. One day when Vic goes searching for something lost, she, unfortunately, encounters Manx . . . and his unimaginable evil. Vic McQueen is now on Charlie's naughty list.

NOS4A2 (pronounced "Nosferatu") is an upcoming American supernatural horror drama television series that is set to premiere on June 2, 2019, on AMC. The series was created by Jami O'Brien and stars Ashleigh Cummings as Vic McQueen and Zachary Quinto as Charlie Manx.

If you want another wild, psychic-induced thrill ride involving plenty of mystery, check out these suggestions.