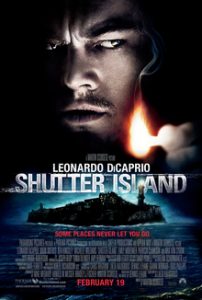 U.S. Marshal Teddy Daniels and his partner, Chuck Aule, come to Shutter Island's Ashcliffe Hospital in search of an escaped mental patient, but uncover true wickedness as Ashcliffe's mysterious patient treatments propel them to the brink of insanity.

Shutter Island is a 2010 American neo-noir psychological thriller film directed by Martin Scorsese and written by Laeta Kalogridis, based on Dennis Lehane's 2003 novel of the same name. Leonardo DiCaprio stars as U.S. Marshal Edward "Teddy" Daniels, Mark Ruffalo plays his partner officer, Ben Kingsley is the facility's lead psychiatrist, and Michelle Williams is Daniels' wife. Released on February 19, 2010, the film received generally favorable reviews from critics, was chosen by National Board of Review as one of the top ten films of 2010.

If you're looking for suspense titles similar to Shutter Island, check out these suggestions that revolve around forgetting, and sometimes remembering, in mind-altering environments.

An amnesiac attempts to reconstruct her past by keeping a journal and discovers the dangerous inconsistencies in the stories of her husband and her secret doctor.

One night after an evening out, Jason Dessen, a forty-year-old physics professor living with his wife and son in Chicago, is kidnapped at gunpoint by a masked man, driven to an abandoned industrial site and injected with a powerful drug. As he wakes, a man Jason's never met smiles down at him and says, "Welcome back, my friend." But this life is not the one he knows.

The body found in a muddy grave across the street is just the latest horror threatening to tear Ali McGovern's life apart seam by seam. She knows Angelo, her brooding teenage son, is keeping secrets. She fears he's in danger, too. But her new job at the psychiatric hospital, the job her husband pushed her into, is using up everything she's got every day. She can try to ignore the sounds that surely can't really be there. And she can try to trust the doctors, who can't be as dark as they seem. But can Ali hold herself, her life, and her family together without getting blood on her hands?

The mentally ill patients in Beechway High Secure Unit are highly suggestible. A hallucination can spread like a virus. When unexplained power cuts lead to a series of horrifying incidents, fear spreads from the inmates to the staff.