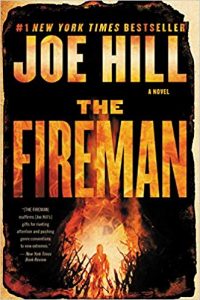 The doctors call it Draco Incendia Trychophyton: a highly contagious spore that marks its hosts with beautiful black and gold marks across their bodies before causing them to burst into flames. There is no antidote. Harper Grayson was a nurse who treated hundreds of infected patients; now the telltale gold-flecked marks are on her skin. But Harper wants to live at least until the fetus she is carrying comes to term. Her husband Jakob becomes unhinged and abandons her. And a man in a dirty yellow fire fighter's jacket straddles the abyss between insanity and death. Known as The Fireman, he has learned to control the fire within himself, using it as a shield to protect the hunted - and as a weapon to avenge the wronged.

If you like books on mysterious, unexplained plagues, check out these suggestions.

In an apocalyptic near-future world, a mother and two small children make their way down a raging, white-capped river - blindfolded. One wrong choice - like taking the blindfold off - and they will die. And something is following them - listening for them.

One afternoon at an outdoor market in India, a man's shadow disappears - an occurrence science can not explain. But, he is only the first. The strange phenomenon begins to spread, and while those who are afflicted inherit a new power, there is also a sacrifice: the loss of all memories.

DC Jerry Pardoe and DS Jamila Patel investigate a series of violent crimes committed by unlikely people - all of them wearing second-hand clothes. Could these garments be possessed by a deadly supernatural force?

In a small Appalachian town, women begin to fall asleep and not wake back up. Not to mention they become shrouded in cocoon-like gauze, and if they are awakened, they become feral and violent.

View more suggestions for The Fireman.