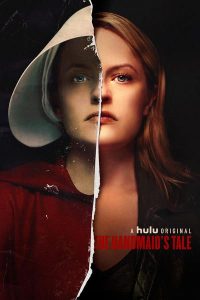 The Handmaid's Tale by Margaret Atwood: After a terrorist attack kills the President and most of Congress, the government is deposed and taken over by the oppressive and controlling Republic of Gilead. Offred, now a Handmaid serving in the household of the enigmatic Commander and his bitter wife, can remember a time when she lived with her husband and daughter and had a job before she lost even her own name. Despite the danger, Offred learns to navigate the intimate secrets of those who control her every move, risking her life in breaking the rules in hopes of ending this oppression.

The TV show: The Handmaid's Tale is an American web television series created by Bruce Miller. The first season premiered in April 2017. In May 2017, it was renewed for a third season to premiere on June 5, 2019. The Handmaid's Tale has received widespread critical acclaim and won eight Primetime Emmy Awards, including Outstanding Drama Series. It has also won Golden Globe Awards for Best Television Series Drama and Best Actress for Elisabeth Moss, who plays Offred.

Check out the following dystopian titles that reflect the haunting lives of the Handmaids and the resistance that follows to make a difference in a world of unfathomable rights.