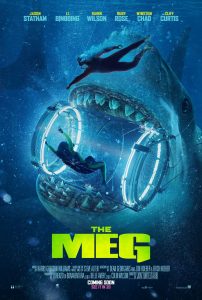 A prehistoric shark surfaces off California and proceeds to wreak havoc. Sixty feet long, it is a member of a species living in the ocean depths for the last 100,000 years. Jonas Taylor, a paleontologist, and deep-sea submariner tries to capture it for an aquarium.

The Meg is an upcoming science fiction horror film directed by Jon Turteltaub with a screenplay by Dean Georgaris, Jon Hoeber, and Erich Hoeber. The film stars Jason Statham, Li Bingbing, Rainn Wilson, Ruby Rose, Winston Chao, and Cliff Curtis, and follows a group of scientists who must stop a 75-foot Megalodon shark from terrorizing a beach.

If you want another deep-sea novel with slimy, hungry creatures - check these suggestions out, but don't go in the water.