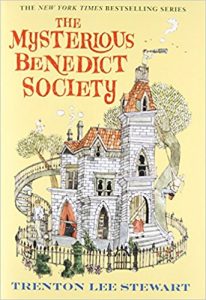 After passing a series of mind-bending tests, four children are selected for a secret mission that requires them to go undercover at the Learning Institute for the Very Enlightened, where the only rule is that there are no rules.

If you're looking for an intriguing, kooky children's mystery, check out these titles.

Imagines an alternate 1826 London, where Ada Lovelace (the world's first computer programmer) and Mary Shelley (author of Frankenstein) meet as girls and form a secret detective agency. Their first case involves a stolen heirloom, a false confession, and an array of fishy suspects.

In 1929 New York City, twelve-year-old housemaid Martha O'Doyle suspects that a wealthy recluse may be trying to communicate with the outside world through the paintings on her gallery walls.

At Greenglass House, a smuggler's inn, twelve-year-old Milo, the innkeepers' adopted son, plans to spend his winter holidays relaxing but soon guests are arriving with strange stories about the house sending Milo and Meddy, the cook's daughter, on an adventure.

When lights start flickering and temperatures suddenly drop, twelve-year-old Tessa Woodward, sensing her new house may be haunted, recruits some new friends to help her unravel the mystery of who or what is trying to communicate with her and why.

Elizabeth, eleven, spends Christmas break at Winterhouse hotel under strange circumstances, where she discovers that she has magic, and her love of puzzles helps her solve a mystery.