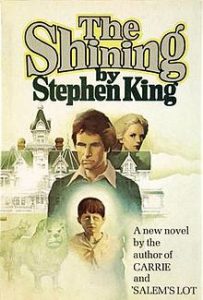 This tale of a troubled man hired to care for a remote mountain resort over the winter, his loyal wife, and their uniquely gifted son slowly but steadily unfolds as secrets from the Overlook Hotel's past are revealed, and the hotel itself attempts to claim the very souls of the Torrence family.

The novel was adapted into a 1980 feature film of the same name directed by Stanley Kubrick. Although King himself remains disappointed with the adaptation, having criticized its handling of the book's themes and of Wendy's character, it is regarded as one of the greatest horror films ever made. The novel was also adapted to a television mini-series, which premiered in 1997. Stephen King wrote and closely monitored the making of the series to ensure it followed the novel's narrative, however it did not receive good reviews.

If you want another spooky, haunted house novel that'll keep you up at night, try these suggestions.

View more suggestions for The Shining.