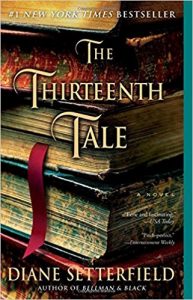 All children mythologize their birth . . . so begins the prologue of reclusive author Vida Winter's collection of stories, which are as famous for the mystery of the missing thirteenth tale as they are for the delight and enchantment of the twelve that do exist. The enigmatic Winter has spent six decades creating various outlandish life histories for herself - all of them inventions that have brought her fame and fortune but have kept her violent and tragic past a secret. Now old and ailing, she, at last, wants to tell the truth about her extraordinary life. She summons biographer Margaret Lea, a young woman for whom the secret of her own birth, hidden by those who loved her most, remains an ever-present pain. Struck by a curious parallel between Miss Winter's story and her own, Margaret takes on the commission. As Vida disinters the life she meant to bury for good, Margaret is mesmerized. Diane Setterfield will keep you guessing, make you wonder, move you to tears and laughter and, in the end, deposit you breathless yet satisfied back upon the shore of your everyday life.

The Thirteenth Tale was made into a British drama television film in 2013. It stars Vanessa Redgrave and Sophie Turner.

If you found yourself lost in Diane Setterfield's classic, try these titles too - even the book's subjects feel a little lost, and sometimes in a dangerous way.

The reclusive Harriet Wolf, revered author, and family matriarch has a final confession - a love story. Years after her death, as her family comes together one last time, the mystery of Harriet's life hangs in the balance. Does the truth lie in the rumored final book of the series that made Harriet a world-famous writer, or will her final confession be lost forever?

Living on her family's gorgeous lakeside estate in Cornwall, England, Alice Edevane is a bright, clever, inquisitive, innocent, and precociously talented fourteen-year-old who loves to write stories. One midsummer's eve, after a beautiful party drawing hundreds of guests to the estate has ended, the Edevanes discover that their youngest son, Theo, has vanished without a trace. Eighty years later, miles away, Sadie Sparrow, a young detective in the London police force, is staying at her grandfather's house in Cornwall. While out walking one day, she stumbles upon the old estate. Her curiosity is sparked, setting off a series of events that will bring her and Alice together.

In a mystical place where violets bloom out of season and the air is salt drenched, a heartbroken woman stumbles upon a diary and steps into the life of its anonymous author.

Carrie settles into the shadow of Slains Castle in Scotland, creates a heroine named for one of her own ancestors, and starts to write about the Jacobite invasion of 1708. When she can no longer tell the difference between today and centuries ago, is she dealing with an ancestral memory - a memory that might destroy her?

The story of to authors from very different worlds, but fate has bound them together in a way time cannot erase.