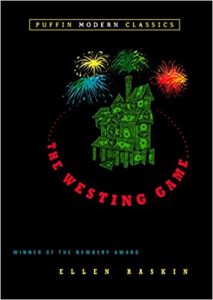 The mysterious death of an eccentric millionaire brings together an unlikely assortment of heirs who must uncover the circumstances of his death before they can claim their inheritance.

if you want a book filled with mystery and puzzling plots, check out these children's titles.

Bedeviled by evil fairies that only she can see, thirteen-year-old Tanya is sent to stay with her cold and distant grandmother at Elvesden Manor, where she and the caretaker's son solve a disturbing mystery that leads them to the discovery that Tanya's life is in danger.

When thirteen-year-old Gerald finds himself the heir to twenty billion pounds from an aunt he never met, he inherits with it a mystery surrounding his aunt's death and various artifacts in the British Museum.

Eleven-year-old Tabitha Crum, whose parents were just about to abandon her, is invited to the country estate of a wealthy countess along with five other children and told that one of them will become her heir.

Puzzle-crazy, twelve-year-old Winston and his ten-year-old sister Katie find themselves involved in a dangerous mystery involving a hidden ring. Puzzles for the reader to solve are included throughout the text.

The Aunts have sent eleven-year-old Stella away to the moldering old family estate, Wormwood Mire, where she discovers two odd cousins and more clues to the mysteries of her family and of herself.