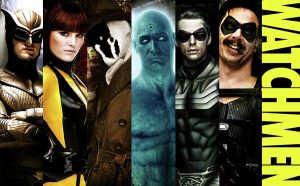 Watchmen by Alan Moore
When a disbanded group of superheroes called the Crimebusters begin turning up dead, the remaining members of the dysfunctional group try to discover the identity of the murderer before they too are killed.

Watchmen was created into a full-length feature film in 2009. Audiences and critics alike enjoyed the film.

In 2019, television network HBO is releasing a brand new television series with the same name on October 20. It is not a direct adaptation of the graphic novel, but instead, it takes place 34 years after Alan Moore's story ends. In the alternative world of Tulsa, Oklahoma, where no one has internet or smartphones, a white supremacist group that calls themselves "The Seventh Cavalry" commits attacks on police members, igniting the question once again: Who watches the Watchmen?

If you want another face-paced, adult-themed graphic novel involving misfits and antiheroes, check out these suggestions.