For generations, four clans of wild cats have shared the forest. When their warrior code is threatened by mysterious deaths, a house cat named Rusty may turn out to be the bravest warrior of all. 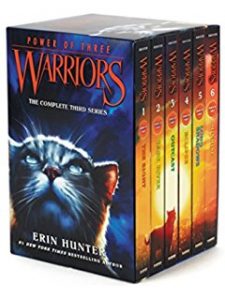 Check out the rest of Erin Hunter's Warrior series. If you're looking for something similar to The Warriors, check out the titles below.

Dusk, the world's first bat, must lead his colony to safety in a time of changing species.

A scrappy alley cat named Aldwyn passes himself off as a magical animal companion to Jack, a young wizard in training, but must convince his fellow "familiars" that he is authentic.

When Raffa makes a cure from a rare crimson vine he finds deep in the forbidden forest, the bat he saves transforms into something much more.

Warring factions of blue jays and cardinals call on Swordbird, the heroic bird of peace, to rescue them from the evil machinations of Turnatt, the tyrant hawk lord who plans to enslave them.

Guided by the spirit of his legendary Mesopotamian ancestor, Jalal, Varjak Paw, a pure-bred cat, leaves his home and pampered existence and sets out to save his family from the evil Gentleman who took their owner, the Contessa, away.

As a dark force engulfs the land, the fate of Erdas has fallen on the shoulders of four young strangers who each have forged a rare bond with their spirit beasts - a bond that gives great powers to all of them.