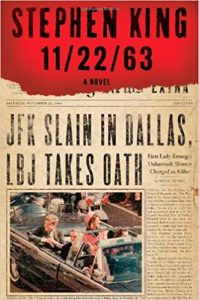 On November 22, 1963, three shots rang out in Dallas, President Kennedy died, and the world changed. What if you could change it back? The author's new novel is about a man who travels back in time to prevent the JFK assassination. In this novel that is a tribute to a simpler era, he sweeps readers back in time to another moment, a real-life moment, when everything went wrong: the JFK assassination.ol librarian named Sadie Dunhill, who becomes the love of Jake's life, a life that transgresses all the normal rules of time.

11.22.63 is an American science fiction thriller miniseries, based on the book 11/22/63 by Stephen King. The series is executive-produced by J. J. Abrams, King, and produced by James Franco, who also has the main role. It premiered on Hulu on February 15, 2016, and was received positively by critics.

If you like alternative histories, these adult fiction titles are perfect for your reading consumption. Now, your endless questions may be answered: "What would the world be like if THAT had happened OR not happened?