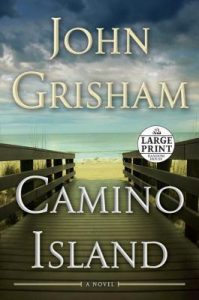 Bruce Cable owns a popular bookstore in the sleepy resort town of Santa Rosa on Camino Island in Florida. He makes his real money, though, as a prominent dealer in rare books. Very few people know that he occasionally dabbles in the black market of stolen books and manuscripts. Mercer Mann is a young novelist with a severe case of writer's block who has recently been laid off from her teaching position. She is approached by an elegant, mysterious woman working for an even more mysterious company. A generous offer of money convinces Mercer to go undercover and infiltrate Bruce Cable's circle of literary friends, ideally getting close enough to him to learn his secrets. But eventually, Mercer learns far too much.

If you want another riveting Floridian thriller, check out these suggestions.

Rick Broca's had more than his share of hard knocks - which may explain why he's a retired cop at the age of thirty-three, working as a technical consultant for Hollywood producer Jake Siegel. For the last few months, that's meant taking care of Siegel's boat, Cagancho, in the Florida Keys. But everything changes when Broca rescues a pilot from his downed seaplane during one of the Keys' notorious storms. Charles Green, injured but alive, is thankful for his good fortune, and Broca takes a liking to him. But is Green who he seems to be?

A woman named Maria Gomez is murdered in Miami, apparently by her husband - who'd been presumed dead, slain by a crime boss. FBI agent Brett Cody can't believe it; dead or alive, the man had loved his wife. Brett also can't help feeling guilty, since he was responsible for protecting Miguel and Maria Gomez. A few miles away, Lara Mayhew has just begun working at a dolphin research facility. She loves her new job - until a dolphin brings her something unexpected from the deep - a human hand.

Descended from pioneer stock, the Bateses are an aristocratic Floridian family with vast holdings in real estate and mining. When matriarch Abigail Bates is discovered drowned in the Peace River, a chain of events is set into motion, embroiling Thorn with a family he never knew he had and a fortune he doesn't necessarily want.

In South Florida, Jack Carpenter is infamous. He's the cop who busted the notorious serial killer Simon Skell - aka the Midnight Rambler - and sacrificed his badge and marriage in the process. But the body of one of the Midnight Rambler's victims has just been uncovered-and forensic evidence suggests Carpenter jailed the wrong man. With Skell just days away from release, the tarnished hero must reopen the case that shattered his life and the lives of eight murdered women.

Politician Diane Fairmont is running for the Florida governorship, but a chill is cast over the campaign when she receives an anonymous note announcing the return of the assassin who killed her husband ten years earlier. Because of complicated ties between Fairmont and his mother, movie actress Tarla Bolton, Detective Cad Bolton is assigned to the case. A desperate race against the clock ensues as Bolton tries to unlock the secrets of a poisonous conspiracy before nature provides the perfect cover for a long-dormant killer to strike again.