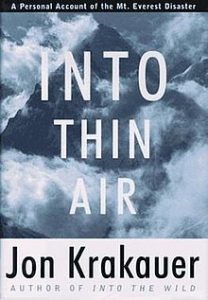 Into Thin Air is the definitive account of the deadliest season in the history of Everest by the acclaimed journalist and author of the bestseller Into the Wild. Krakauer examines what it is about Everest that has compelled so many people - including himself - to throw caution to the wind, ignore the concerns of loved ones, and willingly subject themselves to such risk, hardship, and expense. Written with emotional clarity and supported by his unimpeachable reporting, Krakauer's eyewitness account of what happened on the roof of the world is a singular achievement.

Shortly before Christmas in 1943, five Army aviators left Alaska's Ladd Field on a test flight. Only one ever returned: Leon Crane, a city kid from Philadelphia with little more than a parachute on his back when he bailed from his B-24 Liberator before it crashed into the Arctic. Alone in subzero temperatures, Crane managed to stay alive in the dead of the Yukon winter for nearly twelve weeks and, amazingly, walked out of the ordeal intact.

True story about how a group of people who survived an airplane crash in the Andes had to resort to cannibalism in order to stay alive.

In May 1996, two commercial expedition groups attempted to ascend Mount Everest. Each group contained world class climbers and relative novices, some of whom had paid tens of thousands of pounds for the climb. But as the climbers neared the summit, they were overtaken by intense snow and wind, and found their crucial oxygen supplies depleted. Five of them died, including the expeditions' two charismatic leaders.

Outlines the dramatic 2006 survival story of a famed Australian mountain climber who was pronounced dead and abandoned by Sherpas during a climb of Mount Everest, only to be discovered alive the next day.

In June 1992, best friends Jim Davidson and Mike Price stood triumphantly atop Washington's Mount Rainier, celebrating what they hoped would be the first of many milestones in their lives as passionate young mountaineers. Instead, their conquest gave way to catastrophe when a cave-in plunged them deep inside a glacial crevasse - the pitch - black, ice-walled hell that every climber's nightmares are made of.

This thrilling true tale recounts the deadliest ski area avalanche in North American history and the woman who survived the snow in the face of incalculable odds.