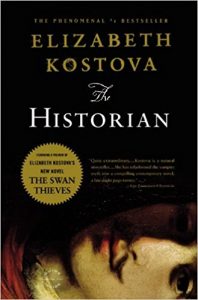 Late one night, exploring her father's library, a young woman finds an ancient book and a cache of yellowing letters. The letters are all addressed to "My dear and unfortunate successor," and they plunge her into a world she never dreamed of-a labyrinth where the secrets of her father's past and her mother's mysterious fate connect to an inconceivable evil hidden in the depths of history. The letters provide links to one of the darkest powers that humanity has ever know -  and to centuries - long quest to find the source of that darkness and wipe it out. It is a quest for the truth about Vlad the Impaler, the medieval ruler whose barbarous reign formed the basis of the legend of Dracula.

If you enjoyed the Gothic suspense The Historian gave you, check out these other novels, some very fangworthy.

It is 1868, and a twenty-one-year-old Bram Stoker waits in a desolate tower to face an indescribable evil. Armed only with crucifixes, holy water, and a rifle, he prays to survive a single night, the longest of his life. Desperate to record what he has witnessed, Bram scribbles down the events that led him here A riveting novel of gothic suspense, Dracul reveals not only Dracula's true origin but Bram Stoker's - and the tale of the enigmatic woman who connects them.

Only Sax knows the true secret to his success: at certain points of his life, he's killed vampires for their priceless hoards of treasure. But now Sax's past actions are quite literally coming back to haunt him, and the lives of those he holds most dear are in mortal danger.

In 1944, just days after the liberation of Paris, Charles Jackson sees something horrific: a man in a dark tunnel, apparently drinking the blood of a murdered woman. Terrified, he does nothing, telling himself afterward that worse tragedies happen during war. Seven years later he returns to the city - and sees the same man dining in the company of a fascinating, beautiful young woman. When they leave the restaurant, Charles decides to follow.

In 1900, Icelandic publisher and writer Valdimar Ásmundsson set out to translate Bram Stoker's world-famous 1897 novel Dracula. Called "Makt Myrkranna" (literally, "Powers of Darkness"), this Icelandic edition included an original preface written by Stoker himself. In 2014, literary researcher Hans de Roos dove into the full text of "Makt Myrkranna," only to discover that Ásmundsson hadn't merely translated Dracula but had penned an entirely new version of the story, with all new characters and a totally re-worked plot.

After centuries of war and blood shortages in Eastern Europe, an undead Vlad the Impaler moves to Mexico and offers eternal life to the only child of Yves and Asunción Navarro in exchange for their legal and real estate services.

View more suggestions for The Historian.