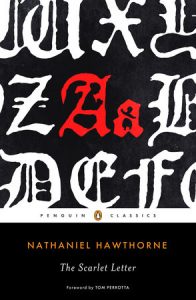 Set in 17th-century Puritan New England, this story of illicit passion, guilt and punishment revolves around the beautiful and mysterious Hester Prynne. She is condemned to wear a scarlet letter as a sign of her adultery, and it has a strange and disturbing effect upon those around her - neighbours, husband, lover and child.

If you're looking for more classic fiction featuring female leads, check out the titles below.

The classic nineteenth-century Russian novel in which a young woman is destroyed when she attempts to live outside the moral law of her society.

A masterpiece of early feminist fiction telling the story of a woman who finally decides to decide her own fate.

In early nineteenth-century England, an orphaned young woman accepts employment as a governess at Thornfield Hall, a country estate owned by the mysteriously remote Mr. Rochester.

For this novel of French bourgeois life in all its inglorious banality, Flaubert invented a paradoxically original and wholly modern style. His heroine, Emma Bovary, a bored provincial housewife, abandons her husband to pursue the libertine Rodolphe in a desperate love affair. A succès de scandale in its day, Madame Bovary remains a powerful and scintillating novel.