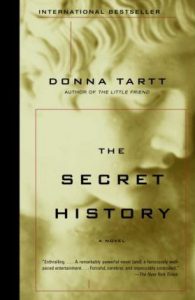 Under the influence of their charismatic classics professor, a group of clever, eccentric misfits at an elite New England college discover a way of thinking and living that is a world away from the humdrum existence of their contemporaries. But when they go beyond the boundaries of normal morality they slip gradually from obsession to corruption and betrayal, and at last - inexorably - into evil.

Some teachers have a little bit too much influence. Check out these dramatic titles that embrace the term "edgy education."

Told from three different perspectives, The Fall of Rome explores powerful and timely issues as it unfolds inexorably, like the classical tragedies that were the glory of ancient civilizations.

Hummingbirds is a novel about the intertwining and darkly surprising relationships at the elite Carmine-Casey School for Girls on Manhattan's Upper East Side, where the rivalries and secrets of teachers and students intersect and eventually collide.

Entreated to tell his side of the story to a detective who put him in prison a decade earlier for a murder he may not have committed, Oliver Marks describes his past as a Shakespearean actor in college whose rivalry with a castmate escalated in dangerous ways.

After a childhood moving from one academic outpost to another with her father (a man prone to aphorisms and meteoric affairs), Blue is clever, deadpan, and possessed of a vast lexicon of literary, political, philosophical, and scientific knowledge - and is quite the cineaste to boot. In her final year of high school at the elite (and unusual) St. Gallway School in Stockton, North Carolina, Blue falls in with a charismatic group of friends and their captivating teacher, Hannah Schneider.

Seventeen-year-old Morgan Monetti shocks her parents and her community with one simple act: She chooses to stand by the man everyone else believes has exploited her, popular high school teacher TJ Hill. But her mother Dinah wants justice. Dinah is a fighter, and she believes with all her heart and soul that TJ is a man who took advantage of her daughter. But has her desperation to start a family closed her eyes to the fault lines in her marriage? And can she face the painful truths about herself and her husband?